How to Help Wildlife in Crisis 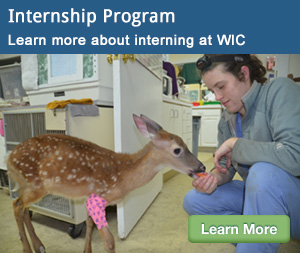 END_OF_DOCUMENT_TOKEN_TO_BE_REPLACED

I was a resident intern for WIC in the summer of ’08 and I continue to volunteer there on a weekly basis. My involvement with the organization has been immensely beneficial to both my personal and career development. WIC is a truly amazing organization that puts the well being of all wildlife before anything else. The organization’s dedication to the life of each individual animal is truly unprecedented. This is something I was able to experience while working for the organization. We worked all… END_OF_DOCUMENT_TOKEN_TO_BE_REPLACED

As a former summer intern I had the chance to really see just how much hard work goes into making this organization a success. It’s great to see so many injured and orphaned animals have a second chance at life. Dara has put her heart into this place and without her, the staff and all the supporters, WIC wouldn’t be what it is today. Personally my internship was an experience I’ll never forget and it has given me the experience I need to pursue my career goals. I only wish I were able to continu… END_OF_DOCUMENT_TOKEN_TO_BE_REPLACED

Wildlife in Crisis will forever hold a very special place in my heart. Thank you for the amazing opportunity to have been part of such a wonderful organization. Dara took me under her wing. She taught me how to “identify, catch and calm” distressed animals, how to care for and clean; feed; love and nurture and then educate people to respect the animals and the world that we live in. I have always had an immense love for animals and nature as a whole. Having been part of WIC exceeded my wil… END_OF_DOCUMENT_TOKEN_TO_BE_REPLACED

As a child I pretended to be a super hero, as many kids seem to do. I ran around my house fighting imaginary crime and saving the day. As I grew older, that feeling of wanting a purpose followed me. I started my internship at Wildlife In Crisis at the beginning of baby season and it shocked me at how many injured and orphaned animals came through the door on a given day. Working nonstop to help the helpless was exhausting but it wasn’t until I released one of our healed red tail hawks at Hawkw… END_OF_DOCUMENT_TOKEN_TO_BE_REPLACED

We all have our charities that we support. Wildlife in Crisis is my charity and I encourage you to make it yours. We’re so fortunate to have Dara and WIC in our community. When I brought an injured fawn to WIC for help I was overwhelmed by the numbers and variety of animals. Raptors, songbirds, mammals, turtles and babies of every size and shape being cared for all day and night by volunteers and interns, AMAZING!

I volunteer at Wildlife in Crisis every Wednesday to care for the raptors and raccoons and to help in any way I can. Every week, I see firsthand the exceptional work being done there. The legendary UCLA basketball coach John Wooden rightly said that the true test of our character is what we do when no one is watching. Dara and Peter set the bar higher than anyone I have ever met and instill those values in all who volunteer beside them. When no one is watching, someone feeds the hummingbird… END_OF_DOCUMENT_TOKEN_TO_BE_REPLACED

At Wildlife in Crisis,animals come in, sometimes barely alive, and you help bring them back to health. Eventually you release them into the wild. I found this work very rewarding. WIC’s founder, Dara Reid’s dedication and knowledge are amazing, I respect her so much!

Straight out of college, I knew I wanted hands-on experience with animals, one that could not be taught in a classroom. With my internship at Wildlife in Crisis, I got just that and much much, much more. The hours were long, the work was very demanding but nowhere else could I experience the joy and reward of watching orphaned animals grow healthily in my care. I never thought that in one summer, I could raise more than a dozen fawns and also care for young woodchucks, foxes, ducklings, gosling… END_OF_DOCUMENT_TOKEN_TO_BE_REPLACED

Wildlife in Crisis will always hold a special place in my heart. It’s where I was introduced to new animal species, where I learned how to care for injured and orphaned wildlife, and where I saw firsthand the types of dangers animals are exposed to. I can’t imagine ever forgetting the people, animals, and experiences that were involved in my internship here.

A wonderful and life changing experience.

Please consider sponsoring a recuperating patient at Wildlife in Crisis.   Below are just some of the animals we care for at WIC and the cost associated with their care.

Each of over 5,000 animals brought to Wildlife in Crisis every year has a story to tell.

Each was given a second chance at Wildlife in Crisis.

Any glimpse into the life of an animal quickens our own and makes it so much the larger and better in every way.

All images and text on this site are copyrighted by WIC.
No part of this web site may be reproduced in whole or part, in any form or
by any means without permission in writing from Wildlife in Crisis, Inc.

This function has been disabled for Wildlife in Crisis.